COVINGTON, LA.– Across the lake, there’s a band that’s deep rooted in the soul and 70’s fun.  St. Paul’s Marching Wolves of Covington.

“The biggest part about putting on a show is crowd reaction.  I think that is what St. Paul‘s really nails.  We’re there for the crowd and we do what makes the crowd happy.”

“We’re a band that dances.  We groove. They get a kick out of it, especially on the parade route.  As soon as someone starts to see the white hat they know they are going to get a good show.”

The chain of command in this band is simple, starting with the director and next are two ministers of the funk congregation of music- the St. Paul’s Dancing Wolf drum majors.  They pick and direct the songs in the heat of battle, with the director of bands acting as the quiet strength and guide on the sidelines

“I grew up in Pittsburg and so we had a pretty lame director that didn’t have cool songs.  We played squared tunes.  The day I got hired, I met with our president, Brother Ray.  He said that if you like your job, don’t change it, said Moran.

The sound has changed little since their early days of influence from a legendary source in the capital city. 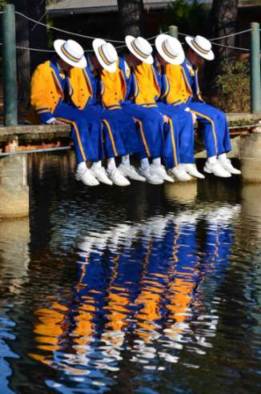 Moran says, “The first director here was named Roy Mouton.  He was a graduate of Southern University.  That’s what he started here was that Southern style show band.”

Former Senior Drum Major Ross Hightower says, “St Paul’s is pretty unique, we have over 30 different songs we can play at any time.”

“September by Earth Wind and Fire, Tower of Power, George Clinton.  Its that funk era that we have as our roots for this group.  We play a lot of traditional brass band songs like Hurricane Season and A.P. Tureaud,” said Director of Bands Andrew Moran.

Former Junior Drum Major Deuce Montiero told us, “The best thing about St. Paul‘s is the brotherhood.  Every time you come to band practice, you are surrounded by 89 other brothers.”

The brotherhood of The Wolf is a formidable front for musical warfare.

“Live Jesus In Our Hearts……Forever”